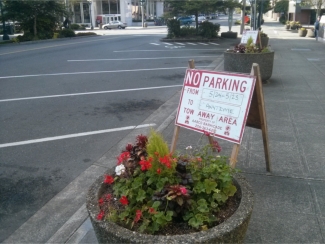 As you can see, there’s a big “No Parking” sign on the sidewalk. The funny things is, the sign has dates on it and the dates are for a few days away. So, you can park there. But people don’t. Why?

It’s because they have a mental shortcut that usually works pretty well for them. A “No Parking” sign means don’t park there. We all have these mental shortcuts. And mostly, they work for us. But when they don’t, it can be trouble…

The Structure Of Beliefs (Positive, or Negative Beliefs)

While believing that “No Parking” signs means you shouldn’t park there probably isn’t much of a problem, we can look at the structure of that belief to ferret out other beliefs that may be causing serious problems.

Cause and effect: “When she wears that dress, it makes me mad.”
Complex equivalence: “That look symbolizes his growing frustration.” In this case, the word ‘symbolizes’ is about the meaning of the look.

These beliefs are mental shortcuts.

Why do we care about the linguistic structure of beliefs? Well, because beliefs can be very helpful in us having the kind of lives we want to — or they can get in our way. Knowing the linguistic structure helps us figure out what beliefs we (or our clients) have. Then, if those beliefs are hindering us, we can find ways to dissolve them, work around them or challenge them. Sleight of Mouth patterns and the Meta Model are two ways I often use.

How To Practice Uncovering Beliefs

For now, let’s talk about how to get good at uncovering these linguistic patterns that reveal negative beliefs. Begin to “tune your ears” to pick up these limiting beliefs in your language and the language of others. Pay attention to words and phrases that contain cause and effect or meaning statements or imply them.

Here are some examples…

Use It For Yourself

One of the best ways to practice uncovering beliefs is with yourself. Pay attention to your own belief and meaning statements. Then, feel free to ask yourself if the beliefs you’ve expressed are beliefs you want to keep.

How Can We Change?

We Get What We Want