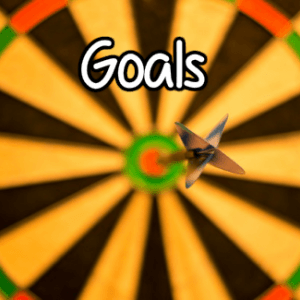 Recently, I saw yet another article that (partially) missed the boat. It talked about studies that indicate that positive thinking about a goal actually decreases the chances of you reaching the goal. The article added that people who spend time thinking about the obstacles they face in reaching their goal, and how they’re going to overcome those obstacles, succeed more often.

In order to illustrate this idea, let me ask you two categories of questions. . .

OK, for the first category of questions, if you had thought about them, what was your next step? What did you do in order to date a movie star, own an island, or be a hero? Chances are, you didn’t do anything.

How about the second category of questions — buying groceries, or a meal? What was your next step? You might have had a thought such as, “I’ll pick up the groceries on my way home.”, or “Should I go to my usual restaurant, or try the new Thai place? I forget, are they open late tonight?”

You’re much more likely to go into more of a planning mode with category 2 type questions. Why? Because, unless you’re really planning to date a movie star, own an island, or be a hero, category 1 are fantasies. You go into planning mode when you’re thinking about something you’re actually going to do, such as the category 2 ideas.

I have a very successful friend who has a planning/goal setting process he does every year. He said something about it to me once, that struck a chord. He said, “I keep working with the goal until it seems real to me.” The way he said it made it seem as if it was almost inevitable, in his mind.

When you’re really thinking about doing something, you start planning. You think about logistics. You strategize about overcoming obstacles (If the restaurant is not open late, I can always go to the place just down the road.).

So, people who are actually thinking about doing something, think about obstacles, and make plans for how to overcome the obstacles.

But before they think about obstacles, they have a belief that the goal it possible.

So, there’s fantasizing and wishful thinking, and there’s thinking about goals in ways that actually help propel us toward those goals.

Now, don’t get me wrong — fantasizing is useful, even in practical goal setting. It feels good, and helps give us an emotional connection to achieving the goal. However, fantasy alone, without belief, or without going into planning mode may be counterproductive.

Why? Because we’ve told our mind that the fantasy is not something we’re really going to do!

The brain has a coding system, that lets us know how to think and feel about things. That coding system is the qualities of images, sounds and feelings we have. We call those qualities, submodalities.

We can map submodalites across  (change the submodalities of one kind of thought to another). There are lots of ways to make something seem more real, mapping submodalities from ‘fantasy’, to ‘it’s gonna happen’ is one of them.

Putting On Your Exercise Pants

When I decide to exercise, but I don’t feel very motivated to do so, I have a little trick. I put on my exercise pants. I could visualize myself fitter, feel good about it, and use that to motivate myself. But some days, it’s not easy to get there. Instead, I think about how tired I am, and how hard the exercise is going to be.

So, I put on my exercise pants.

I know I’m not going to sit around all day in my workout garb. Even if I answer email, and write an article first, I’ll eventually exercise. Have those clothes on makes it more real to me. It’s inevitable.

So, when I’m not feeling motivated, I can remind myself that it’s not my job to exercise. It’s my job to put on the pants. Once I’ve started the process, it’s not just an idea, it’s reality.

We all have our metaphorical exercise pants we put on — those little things we can do to make something seem more real.

OK, let’s list them out and look at them. If you want to succeed at something, the following are helpful. . .

Let’s look at those.

A Belief That It’s Possible

If you don’t have a belief that something is possible, it will be hard to maintain the motivation to keep working at it. What if I told you that standing on your head for 20 minutes, every day, for a year, would result in you getting rich? Would you do it? Even if you started out, you’d quickly lose motivation. “This is ridiculous. It’s a waste of time.”, you might think. And that’s what happens when we don’t believe something is possible (even at an unconscious level).

The same thing goes for if you want to have a more loving relationship, but you believe that all relationships grow stale over time. You might not invest in it the same way you would if you didn’t have that belief.

If you’re looking to be more successful in your practice, but you have a belief that money is short, and people aren’t going to part with it, that could derail your motivation.

When I was a kid, if I needed some information, and I didn’t know someone who knew it, the encyclopedia was my first stop. If it wasn’t there, I’d try the local library. If I couldn’t find it there, there were always interlibrary loans, from the bigger libraries. If it wasn’t there, I was out of luck,

It might take weeks, or months to learn what I needed to know.

A few years ago, a friend’s furnace wasn’t working. I looked at the model number, popped online and found a manual. After looking at that, and reading a few forum posts about the same problem, I had a solution.

Information is available at a level that was unthought of, just 25 years ago. Our phones now have access to far more information in an instant, than the president of the United States available, in the ’80s.

Some colleges now even have their course content online.

The problem is not lack of access to information (although sometimes it’s not well organized, and it’s some work to find what you need). But that’s what many people focus on. Diet books are still popular. They’re selling the idea that it’s lack of information that’s keeping people overweight.

An Emotional Connection To Reaching Your Goal

If you don’t have a belief that the goal is possible, it will be hard to get that strong emotion going, so belief and emotion go hand-in-hand. Think about being a rock star, for a moment. It might be fun to think about; most of us have fantasized about it. But you might not think of it as realistic, so your mind knows it’s a fantasy. While the fantasy may generate positive feelings, they’re probably not the depth of feelings you’d get if you goal was a real possibility.

But if you have deep, meaningful feelings attached to your goal, and a belief that it’s realistic, you’ll have a strong motivation to act — as long as mentally, you connect your actions with achieving the goal.

In other words, you have the thought that working on marketing your hypnosis practice will result in the kind of professional success you want.

Habits That Ensure Your Success

Another reason many people don’t do what they need to do, is poor habits. If you don’t consistently work on getting new clients, or practicing guitar with the correct focus, it will be hard to get there.

Perhaps the greatest basketball coach to ever live, John Wooden, had an interesting way of starting practice each year. He would teach the players how to properly put on their socks.

Well, his explanation was that, if you didn’t wear your socks correctly, you would get blisters. If you got blisters, you would probably miss practice and game time. If people missed game times, they might lose games they otherwise would have won.

So, wearing your socks correctly was a basic building block of success.

And that’s the way many parts of success are. They’re not sexy, or fun, unless. . .

And this is where those good feelings can be a trap, if they’re not oriented properly.

A lot of new NLP practitioners spend a lot of time thinking about a logo, and designing brochures. Or they may rent an office based on how good they feel thinking about themselves working there, or make the style of the furniture they buy a priority. Now, those are things that may need to be done. But by itself, a logo won’t get you clients. And brochures won’t either, unless you get them out there.

If you’re a basketball player and you spend more time on your spin moves, than on passing and footwork, you’re falling into this trap.

If you’re a guitar player, and you spend your practice time playing your favorite songs/solos, instead of working on specific aspects of your technique, you’re falling into this trap.

The trap in these activities is that they feel like you’re doing something toward your goals, but they’re not necessarily the main activities you should be focusing on.

The main activities you need to focus on, may not intrinsically feel as good as the fun stuff you want to do. That’s why you have to connect those good habits with reaching your goal. So, instead of buying fancy furniture, you go to a chamber of commerce meeting. And while you’re there, you’re thinking about how it’s going to get you clients, and they are going to help you get the level of success you want. That can make it fun.

One way to create habits that ensure your success is to mentally connect those habits with achieving the goal. In other words, when you’re doing your morning yoga workout, imagine yourself the way you want to be, and then mentally make the connection. “Keeping focused and doing this yoga consistently, gets me there.”

Now, we’ve talked about a lot of aspects of achieving goals, let me lay out some of the skills you’ll need, in order to get at this from multiple angles.

Mapping across submodalities: Being able to take a thought and re-code it to change the way you think and feel about it is a really useful skill. You can re-code a belief into a non-belief, a non-belief into a belief, a fantasy into something you’re determined to do, and a lot more.

Well formed outcomes: Well-forming a goal or an outcome, is the NLP process that puts the goal in the programming language of the unconscious mind. Rather than willy-nilly positive thinking about a goal, it’s a step-by-step process for programming the mind to automatically and efficiently move toward your goals.

New behavior generator: The Ndew Behavior Generator is designed to fill in a lot of detail in your unconscious mind. Beyond getting the goal set up correctly, in your mind, it gives a more detailed, unconscious roadmap on how to get there. It’s a great process to use, after well-forming an outcome.

Anchoring: need to attach a positive emotion to a habit you’d like to do more consistently? Anchoring is a good way to get ‘er done.

Put on your metaphorical exercise pants (you might want to put on some real pants too — or a skirt) and go get ’em.