How To Never Give Up: Part III (Limiting Beliefs)
1

How To Never Give Up: Part III (Limiting Beliefs) 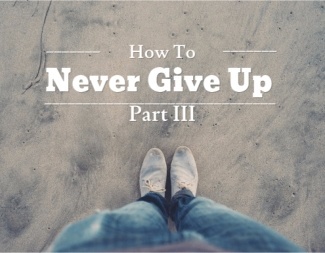 In Part I & Part II, we talked about eliciting the state of ‘never giving up’ and well-forming a goal. But what happens if you’ve got a belief that’s getting in your way? In this article, we’ll explore one answer for dealing with limiting beliefs. And FYI, you can use this on yourself, or with clients.

Well, the answer is, you’ll run into it. And that’s good news!

You see, the mind just doesn’t motivate you to achieve something it thinks is impossible, or unpleasant. So, if you have a belief that a goal of yours is ‘bad’ or not possible, you may find yourself not achieving it.

Let me give you some examples.

Let’s suppose you have a goal to be a successful artist, and an unconscious belief that a true artist must suffer and be poor. You’re less likely to be a success as your mind is divided about it. Your level of success might go up and down, or you might just end up less successful than you’d hoped. There might even be self-sabotaging behavior.

Or, what about a person who wants to lose weight, but is in a committed relationship and thinks they won’t be able to handle the attention if they were thinner?

Really, any time that you have difficulty reaching a goal, it’s good to look for a hidden, limiting belief that might be getting in your (or your client’s) way.

Nothing More Than Feelings

Now, much of the time, that belief will come up and get taken care of when you well-form the goal. Why? Well, a lot of the time it can get solved with a feeling. Here’s an example…

Let’s suppose someone wants to exercise. But whenever they think about it, they imagine themselves on a treadmill, bored and exhausted. Well, that’s their belief about what exercise is. But it’s probably not a very strong belief. So, you get them to think of times they felt energized and excited, anchor those feelings. Have them re-set their goal to being physically active while energized and excited. When they visualize it, fire off those anchors. That will probably do it for most folks. But what if the belief is a more entrenched and deeper. What if their parents programmed them be saying over-and-over again, how tiring it was to exercise?

Well, then you might need to do a belief change. You want to change the old, disempowering belief to one of possibility. For the example, we might change the belief in the example to, “exercise can be fun and enjoyable.”

Often, when you’re well-forming a goal, there will be signs of discomfort or incongruence in the person when they’re thinking about the goal. You’ll hear a lack of excitement in their voice or their posture, or the look on their face will not look like they’re completely into it. That means that part of them isn’t on board and that there may be a belief getting in the way.

Have you ever opened a present up in front of the person who gave it to you and you didn’t like the present? You might see that look on their face! That’s when you ask them to tell you about how they’re feeling. Pretty soon you’ll hear a belief, in there. Then, you’re going to want to change it.

There are various ways to change beliefs. Here’s one method.

Now, most people are disappointed when they find one of these beliefs. I always think, “cha-ching!” You see, you’ve hit paydirt. That belief you’ve found is likely the thing that’s been preventing attaining the goal. Now that you’ve found it, you can go get it!

So, there you have it in 3 parts (so far).
1) Elicit a state of ‘never give up’ and attach it to acting on your goal.
2) Well-form your goal.
3) Shift any beliefs that are getting in the way.

There are lots of ways to deal with these kinds of situations beside a belief shift. Parts work may be appropriate. 6-step reframing could be a good choice here.