How To Never Give Up: Part IV

How To Never Give Up: Part IV 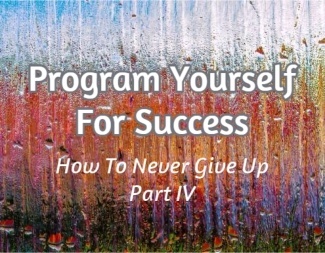 Have you ever watched a motivating movie, performance, or speech and it made you act, right then? Ever been inspired to immediate action? Well, this article is about how to get that feeling, at will and attach it to what you want to accomplish (it works for you, or your clients). In short, how to never give up. Plus, we’ll talk about how to solve the most common problem people have when they use this approach.

This article is one of a series of 4 or, How To Never Give Up. Here are links to the other 3 articles.

A big percentage of NLP and hypnosis is about attaching resourceful states to contexts where we want to get stuff done. For instance, a person with a fear of public speaking has felt calm at some time. They just have difficulty accessing that feeling when they’re speaking in public. NLP and hypnosis can help get the calmness into the public speaking context.

Think of it this way. The old-time cliche’ of the stage hypnosis is that they snap their fingers and somebody barks like a dog or clucks like a chicken. There’s nothing intrinsic about finger snapping that causes clucking or barking. Those things are linked together by the hypnotist’s suggestion. And that’s one of the main things both hypnosis and NLP are used for — that linking ability. We can link just about any state to just about any context. We can link calmness to speaking in public. And we can link inspiration and the motivation for immediate action to lots of things. Does that seem useful?

But how do we do it? And how do we apply that skill to our lives and/or the lives of our clients?

The most obvious thing to do is to spend more time engaged in activities that inspire you to action. Instead of watching “The Real Housewives of Millionaiers”, watch something that motivates you to action. I watch videos of great guitar players and great singers when I want motivation. Then, I head over to practice.

Now, as an hypnotist and/or NLPer, you have a variety of ways to attach those feelings of inspiration and motivation to a goal.

Two of the simplest are anchoring and direct suggestion. You can anchor the feeling of motivation and inspiration and have the client think about moving toward their goal. Then fire the anchor. Do it a bunch. You can hypnotize someone and verbally suggest that every time they think about doing something toward their goal, feelings of motivation and isnpiration flow into every cell of their being — and they act on them!

The New Behavior Generator is a nice process to use when you have an inspiring role model. It’s essentially a very specific way of mentally rehearsing how you want to be, by using a role model. The basics of it are this…

Of course, you can fire off that anchor of motivationa and inspiration during that process. That’s the short version. I’ve got a whole program on doing it effectively. It’s called Practical Guide to the New Behavior Generator & Future Pacing.

When Beliefs Get In The Way — Never Give Up

Sometimes, when people see their role model who might otherwise be inspiring, they get de-motivated! Why? It’s generally because of a belief. If you see a video of Michael Jordan playing basketball, there are different ways you can respond. You can think, “I’d like to be able to do that,” or you can think, “I’ll never be that good.” If you focus on what it is you can’t do, it might de-motivate you.

Even if you can’t be as great as Michael Jordan, you can learn something from him that will improve your game. But, in order to do that, it’s best to have a mindset that allows for the best possible uptake of new information and skill. And that mindset can be blocked by an “I’ll never be able to do that” belief and focus.

If you run into that, it might be a good idea to shift that belief, first. How will you know if a negative belief is getting in the way? Well, there will be a less than fully congruent, motivated reaction, when thinking about doing whatever it takes to achieve the goal, either there’s a conflict (parts) or a belief. A parts conflict should be taken care of when you well-form the goal. You can take care of a belief that’s getting in the way, with a belief change process. I’ve outlined one way to change beliefs here.