Part II: How To Never Give Up — Well-Forming Your Compelling Goals

Part II: How To Never Give Up — Well-Forming Your Compelling Goals 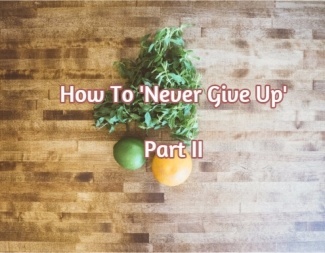 In Part I of How To Never Give Up, we talked about eliciting the state of ‘never give up’ and attaching it to any goal you might have. Let’s talk about another element in developing resolve — having compelling goals.

In NLP, we have a process for putting goals in a format that helps ensure the unconscious mind is on board. It’s called, ‘well-forming a goal.’ It’s a good idea to have many of the goals you set meet what we call the well-formedness conditions. If a goal meets those conditions, it will be vivid, compelling, and motivating.

I’ve outlined the NLP well-formedness conditions here, and I have a program on how to set goals here. In this article, we’ll cover a couple of the main points in order to help you get your goals (and your clients) into a super-motivating, compelling form. That helps you ‘never give up.’

One of the conditions is that goals be represented in sensory-based language. That means, asking what you will see, feel, and hear upon achieving the goal. The richer and more compelling you can make it, the more motivating the goal will be. Another way to get this info is to ask yourself, “How will I know when I’ve reached my goal?”

Evidence: How will you know when you have it?

As an example, let’s take someone who wants to learn to play the ukelele well. Perhaps they’ll hear a specific song being played with precision and feeling, see an audience listening intently and have feelings of confidence and satisfaction as they’re playing.

Or, how about someone who wants to reach a goal in saving money. If you ask different people, “How will you know when you’ve reached that goal?”, you’ll get differing answers. Some might say that they’d see their bank balance on their statement. Others might hear their internal dialog tell them how much money they’ve saved. In any case, it’s important to get that represented in the three major senses — visually, auditorily and kinesthetically (feelings). You can experiment with making the imagery in their mind’s eye bigger and brighter, the sounds louder and the feelings more intense. The idea is to get the maximum amount of motivating emotion attached to the idea of having achieved the goal.

Remember to do this for having the goal, not the process of getting it. In other words, if you’re after exercising more regularly, make sure you’re visualizing the results of exercising — not the exercising itself. That’s what makes for compelling goals.

What If You Feel Resistance?

Now, you might feel some resistance in doing this process. If so, that’s good news. You’ve probably discovered exactly what’s been keeping you from progress on the goal. Let’s take care of that.

Another well-formedness condition is that the goal maintains the benefits of the current behavior. That’s a fancy-pants way of saying that you need to have it both ways. Let’s say a person wants to eat more healthily. Well, it’s a good idea to find out what feeling they get out of eating the way they do currently. Maybe it’s a feeling of ease related to the convenience of fast food. Maybe eating poorly has a feeling of freedom attached to it. They like to eat whatever they want. When their mind wants to motivate them to get feelings of ease or freedom, it may only know the behavior of eating fast food. Let’s give the mind something else that will motivate them in a different direction!

It’s pretty simple. When you ask them how they’ll know when they’ve reached their goal, they might say that they’ll feel healthy and energized, they’ll look at their scale and see a certain figure (pun intended) and they’ll say to themselves, “Way to go!” Now, just add feelings of freedom and ease to that scenario. Say, “Look at how at ease you are as you stand on the scale and feeling healthy and energized gives you a tremendous feeling of freedom.”

That way, when their mind will have an additional representation of how to get those feelings. It will make it much, much easier to choose the new behavior.