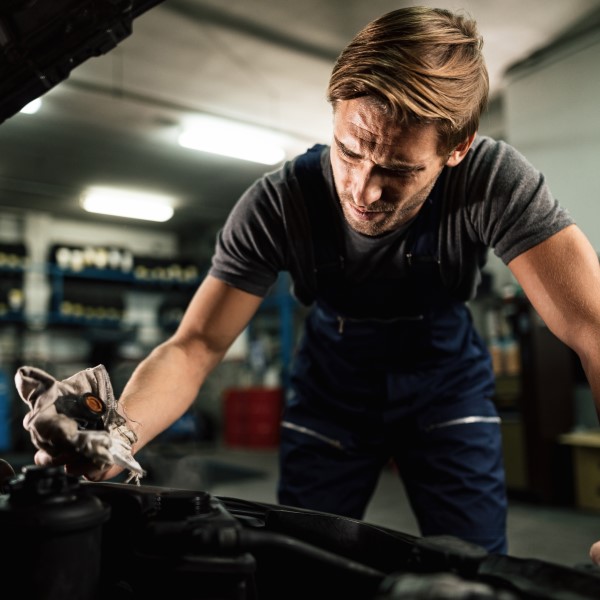 I often put the following scenario in front of students…

“How many of you,” I say, “have gone in to your mechanics office, sat down, taken off all your clothes, and waited for your mechanic to show up?”

Usually, only about 1 out of 25 raises their hand (a joker). In one case a woman said she ended up marrying the mechanic.

But most people have a very strong ‘no’ response. Many go as far to say they would never do anything like that. Their minds are closed to the idea. You can see the ‘no’ on their faces.

Me too. I have a great mechanic and all, but that’s not likely to get my car fixed. And that’s why I’m there.

I’ll ask them if they’d ever consider something similar. From that state, most will say no.

Then I ask how many have done something similar at the doctor’s office. Most of us have. The point is that context is powerful. Each context has a set of beliefs, rules and behaviors that come with it.

What’s acceptable in one context may not be in another. When you want to get through to someone, what context they view the interaction through can be make or break.

If you have any doubts about how powerful context can be, take a look at The Stanford Prison Experiment. It will blow your mind.

Once The Context Is Set…

In some ways, once the context is set, people have their minds made up. Another way of putting it is, they may be closed to anything that falls outside of the behaviors or ideas they might consider go with that context. And sometimes, once someone believes they know what the context is, they mentally go, “I already know what there is to know about this.”

In other words, they may have already categorized a subject as “I’ve got it already.”

Hey, we all have mental shortcuts. When we see something that’s obviously a door but is not exactly like any other door we’ve seen (maybe it’s a different color), we may just assume it’s a door. We don’t have time to examine every detail of life and make sure we’ve got it right.

So, when we run across something that’s similar to something we’ve already experienced, we may say to ourselves, “I know what that is.” In that case, we may be closed to new information and new viewpoints–information and viewpoints that could be just what we need!

Take a look at any blog (even this one) for evidence of this in action. Look at any post and the comments after it. Look for comments that basically say, “I know what this is–it’s this other thing.” Read the post and comment carefully and see if you think they’re accurate or whether they’ve missed the point.

Then, all the attitudes, beliefs and behaviors that go with that context go into effect. We may be less open to new information. We may be less flexible. If you’re a therapist and that’s what your client does, it may be detrimental. “Oh, this is just more of that positive thinking crap.”

If you’re writing or speaking, people may close their minds or/and filter you through what they think they already know.

What Context Would Help?

So, it can be really helpful to set a context where the behavior you’d like is appropriate. Again, if you’re a therapist, it’s useful to have a context where clients are flexible, willing to engage in new behaviors, are open to ideas…

How many contexts can you think of that might be useful? Take a few moments. Feel free to write any ideas you have in the comments section of this post. How would you get that context up and running in their minds?

You can confuse them. When a person is confused (particularly about context), they may not know what rules to bring down about the situation. If you’ve ever had someone you didn’t recognize come toward you at a party with a big friendly smile (as if they knew you), you might know the feeling. You might alternate between pretending you know them and wondering if they were looking at someone else to worrying that they were creepy…

In short, you don’t know how to behave. In those moments, were someone to suggest a behavior to you, “That’s George, smile and wave ‘Hi,'” you’d be likely to follow that suggestion.

There’s a balance though. I’ve seen folks that are so confusing that people bring the, “this person is an idiot’ context down. That’s usually not one that’s helpful–although it worked for the TV detective Columbo. He looked like an idiot on purpose: to close people’s minds to the idea that he might catch them in a crime. They were off their guard.

Almost any behavior is useful in some context.

Hypnotic language is a great way to confuse. Particularly, look at ambiguous language and how to say things that might apply to two or more contexts or might mean two or more things.

Metaphor, when done correctly, is a powerful way to keep people from bringing their preconceptions to the table.

Overloading the conscious mind with tons of details and things to do is another way. So is giving a person a lot of physical things to do at once (think rubbing your head and patting your tummy, then switching). Some physical hypnotic inductions overload by getting complex physically.

Considering a behavior in another context is one way of reframing too. It can help bring someone in to a more open frame.