Did William Shakespeare Use Hypnotic Language? 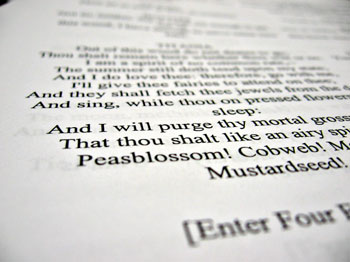 If you’ve ever listened to Shakespearean dialog, you know it’s very “trancy.” But a lot of that is because it’s unfamiliar to us. Did Shakespeare use hypnotic language techniques that would affect his contemporaries? Yes, he did!

David and Ben Crystal have been studying accents from Shakespearean times and have discovered unknown depth to the meanings of Shakespeare’s works. How is that possible? Shakespeare has been performed all over the world for hundreds of years.

Phonetic Ambiguities In The Time Of Shakespeare — And Now

One of the most famous examples is your/you’re unconscious.

When listened to, these sentences could be understood as either…

“Your unconscious, your mind is very powerful.”

How We Use Phonetic Ambiguities

We can use these ambiguities (along with other hypnotic language patterns) to deliver dual messages, to keep the mind guessing as to meaning (and thus, more open) and more.

Now, take a listen to one ambiguity Shakespeare used in one of his plays…

You can hear him using the word “lines.” When spoken with the old accent, it sounds like “loins.” Now that certainly brings a new meaning to Romeo and Juliet! Listen to about 47 seconds of the video (to 05:51).

But how would Shakespeare know hypnotic language? Or Benjamin Franklin?

‘Cause It Ain’t Nothin’ New

Well, hypnotic language is natural. We all use it. It’s not new.

But the most effective communicators use it purposefully and in concentrated form. That’s what studying hypnotic language does for you. It give you conscious knowledge of what the patterns are so you can use them with skill and purpose instead of randomly like most people do.

PS: You can learn more about hypnotic language with the Hypnotic Language Mastery Pack 🙂