Do You Make These Same Mistakes With NLP & Hypnosis?: Part II 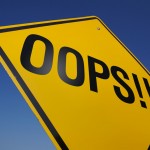 In the highly controversial Part I of Do You Make These Same Mistakes With NLP & Hypnosis?, we covered mistakes 14-10. Here are #s 9-6.

Do You Make These Same Mistakes With NLP & Hypnosis?: Part II

#9: Relying too strongly on a pet theory about an issue

I remember teaching a class down in Arizona and the subject of bulimia came up. One of the students suggested that bulimia was a result of sexual abuse. I said, “Maybe, but let’s not approach it with that assumption.” The student then went on to suggest that the client would require extensive treatment. Again, I replied that it was possible that might be true but I wouldn’t start out with that assumption.

I then went on to tell the story about working with a client who suffered from bulimia. When I started to explore the process my client went through that resulted in her bulimic behavior, I could see that her actions were driven by a feeling of ‘missing out’ at a very specific time. That time was what I call a ‘decision point.’ For her, the point was right after she’d had enough to eat. She had a bad feeling that drove her overeating behavior. We did a simple anchor collapse. The client reported she never had a problem with the bulimia again (I saw her a year or so later for weight loss).

Well, the student who had commented earlier about bulimia didn’t believe it. She told me the client must have been lying, that I must have ignored underlying issues etc. That’s always possible, I suppose. The student “knew” that this client “must have” had sexual abuse in her past.

I think it’s important to consider what happens when we assume that any particular issue is the result of any particular trauma. It’s easy for therapists and counselors of any sort to lead people down the wrong path. False memories easily arise in the context of therapy with an “expert” (therapist) who is convinced that they know, in advance, the reason for a particular problem.

Should we be prepared to find trauma in people’s lives? Yes. Should we assume it’s going to be there? No!

That’s why I like techniques such as the affect bridge. Done correctly, the affect bridge is much less likely to produce false memories than some other techniques. The affect bridge uses feelings that are causing a problem in the client’s life in the present. It traces those feelings back to their roots rather than assuming or guessing where the root of the problem might be. If there’s abuse back there that’s related to the client’s current problem, you’ll find it. If not–it’s unlikely you’ll create it.

#8: Being overly attached to the outcome

We like it when our clients get the results they are after and we don’t like it when they don’t. Truth be told, I’ve had sessions where everything seemed to go right and I thought I was brilliant–and it didn’t work. I’ve also had sessions where I thought I was so-so and the client experienced wonderful results. Of course, it’s not us (the therapists) who change the client anyway. It’s the clients that change themselves. Our job, as I view it, is to create with the client, an environment in which the change they want is more possible. We help clients get out of their own way. We help them activate their internal resources. But we don’t change them.

So, we help them, as best we can, to that place where they can change. That’s our job. But when we get too attached to the outcome, we harm ourselves. Being too attached to the outcome means taking too much credit when clients succeed and feeling a sense of failure when clients don’t. It also means burnout. I’ve seen it happen may times that hypnotherapists burn out after a few years because of the burden they feel for their client’s success.

As with many things, there’s a balance. Of course we do our best and of course we feel better when clients get what they’re after. It’s not about not caring–it’s about taking responsibility for what we can do and not taking responsibility for what we can’t control. We’re responsible for our part and our clients are responsible for their part. Viewed that way, we can practice for many years.

#7: Thinking we know what’s right for the client

It’s been told that Milton Erickson (the great hypnotherapist) use to like it when his clients got married. I don’t know if that’s true or not, but that’s not the way I operate. I might have an idea about what might be good for a particular client but it’s what the client wants that is foremost in my mind. What I find is that when we help a client get more resourceful and feel better, they make better decisions.

I remember a client who was running a very successful consulting business. He wanted to go back to work for a company and stop consulting. I couldn’t wrap my head around that idea at first. You see, I like running my own business and don’t like working for anyone else. At the time I thought that everybody should work for themselves–they’d like it better.

Once I got past my prejudice, I figured out that if I just helped this client get more resourceful, he’d make the decision that would be best for him–not the one I thought he should make.

Occasionally, a client will want something that I simply do not think is a good idea. Even though it’s my job to help a client get what they want, I don’t have to take them on as a client if I feel what they want is not something I might support.

For instance, I often have people contact me about amnesia. They have some event in their life they’d like to forget. I point out that you can not remember an incident but it can still affect you powerfully. People that have phobias often do not remember what caused them–but they still have the phobia and all the bad feelings that go with it. I ask if they’re open to the idea of reprocessing the memory in such as way as to take the negative emotion out of it. That way, they would be able to remember the event if they wanted to but it wouldn’t affect them negatively. If they say no, I don’t take them on as a client. I won’t do something that I think would be harmful to the client or to those around the client.

I once read an article about a hypnotherapist who worked with people using the following metaphor. She believed that people had some sort of punch card reader (it’s an old-fashioned computer input device ) located in their chest area. If the client had a smoking problem, she’d ask them to locate the punch card labeled ‘smoking.’ She’d have them tear it up and then have them go in their mind to the archangel Michael and have Michael replace that problem punch card with a new card that didn’t include the old problem.

Now that’s a nice metaphor for someone who has a particular belief system. The problem is, the therapist believed every bit of it. She stated in the article, that she had found this punch card system in every client! Every client had this punch card reading thing in them–it was the way things worked–the nature of the universe.

She believed the metaphor. Most people (even most hypnotherapists) don’t recognize the full power of metaphor. Metaphor can heal you. Milton Erickson was famous for healing client’s through metaphor. Jeez, I’ve got a whole product on healing through metaphor. But when I tell a story about a frog and a princess, I don’t think the client is actually a frog! When Erickson told a story about turning off parts of irrigation systems (in order to stop blood flow to a particular area), he didn’t believe there were actual spigots in the body!

Yet a lot of therapists out there believe their metaphors. Why? Perhaps because they think the fact that they’re getting results proves the reality of the metaphor. Just because you do a past life regression on someone and it results in their problem going away doesn’t mean that they actually had that past life. People can heal through metaphor. Just because ‘tapping’ works to help reduce anxiety doesn’t mean that the theories about the body’s electrical energy systems being disrupted by trauma are correct–or if they’re correct that that’s how tapping works. It’s a metaphor for how things might work.

The problem with believing the metaphor is twofold (at least). For one, it means we build junky, inaccurate beliefs and we pass on those beliefs to others. Secondly, metaphors are an approximation of something and if we don’t understand where they’re accurate, we won’t understand where their usefulness ends. If we recognize them as only partially accurate, we are more open to improving them.

Otherwise, we end up with an industry that has so many crappy theories in it that any rational minded person looking from the outside would say, “This is a group of nut cases, not to be taken seriously.” It’s one reason hypnosis hasn’t made it further in to the mainstream.