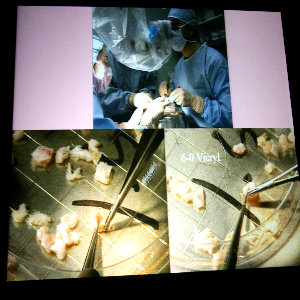 Every so often, somebody does an article on hypno-anesthesia. Typically, it’s treated as if it’s an astonishing new technique. In fact, hypnotic anesthesia has been around longer than any modern chemical anesthesia. Unfortunately for hypnosis, ether as an anesthetic came into use about the same time hypnosis was being explored for this purpose.

Still, there are many cases where hypnosis is useful as an anesthetic. There are some that can’t tolerate drugs due to a weak heart (or other condition). And using hypnosis in conjunction with anesthesia allows doctors to reduce the amount of chemicals used, lowers recovery times, shortens healing time needed, shortens hospital stays and increases the level of patient comfort.

How do I know? Here’s a study that says so…

In a study with 241 patients randomized to three groups (Lang et al., 2000), patients received standard patient-controlled sedation; one group got a standardized hypnosis treatment too, another a structured attention manipulation, and the rest were controls. Adding hypnosis generated much greater pain relief than sedation alone.

Hypnosis also greatly lessened anxiety. The hypnotic group asked for and were given, less medication than the controls. There were fewer problem events with hypnosis, and because of this, procedures took less time. In the case of each variable measured, hypnosis was superior to the attentional manipulation, so hypnosis is not only effective but the effects are also due to the hypnosis (not the placebo effect).

This is one of a whole bunch of studies surrounding hypnosis and anesthesia.

There’s an interesting article on hypnosis and surgery @ ScienCentralNews.

Dr. David Spiegel is quoted as the main expert in the article, he seems to be getting around a lot lately (He was on the Jane Pauley show a while back).

That’s it for this Hypnosis Tip. I hope you’ve enjoyed it fully.