Self Hypnosis and Focusing on your Goal
1

Self Hypnosis and Focusing on your Goal 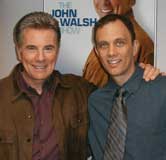 Here Keith is pictured with John Walsh just after his appearance on the John Walsh show. On the show, Keith successfully worked with a young woman who had a severe, long-lasting snake phobia. It took less than 15 minutes!

This month we’re going to talk about self-hypnosis for relieving anxiety and attaining peak performance. One of the most effective ways to show people the benefits of hypnosis is to use hypnosis for our own benefit. To that end, I’ll relate an incident where I used self-hypnosis, to help me overcome nervousness before a big moment in my life.

In December of 2002, I was asked to appear on a national television show (with over 1 million viewers). As I was sitting in my dressing room waiting to go on I started to get nervous. I began to think about all the people watching and about what could go wrong. My breathing sped up and I started to sweat as my inner dialog descended into a swirling cacophony of “what ifs?” I knew I had to do something to change my state of mind. I had been asked to appear as an expert on phobias. How would it appear if a phobia expert was nervous?

One of the most common mistakes people make is to focus on what might go wrong. While there are times when it’s good to consider possible roadblocks and dangers; when you’re about to do something, it’s best to focus on what you want to happen. Do this little experiment to find out how important it is…

If you can concentrate on this idea strongly enough, you’ll find yourself beginning to fall backward! You see, the mind begins to carry out the things you imagine. So what happens if you concentrate on all the things that could start to go wrong? I think you get the point.

I wanted to focus my mind on what I wanted to happen – not what might go wrong. I wanted to use hypnosis to make that focus and concentration even more powerful. And since I only had a few minutes I knew it had to be quick! I began to think about what mental and emotional states would help me be my best in this situation. The phrase “wonderfully calm, wonderfully confident, wonderfully effective” sprang to mind.

Spontaneously, I decided to use one of my favorite inductions (the Dave Elman induction) to induce trance. I’d never used it as a self-hypnosis induction before, but what the heck! In case you’re not familiar with this induction, it has five basic components.

For a full explanation get my Hypnosis Course.

Even before I started the induction my state began to improve (I had already begun focusing on what I wanted.) Since I’ve done the Elman induction a number of times and am quite familiar with the steps I went through it very quickly. I then started repeating my “mantra” over and over to myself. I also began to visualize what I looked like when I was calm, confident and effective. At first I “saw myself” being calm, confident and effective. It was as if I was watching myself from a distance. I noticed how I looked, felt and sounded when in those modes. I noticed my posture and breathing when calm, confident and effective. Then I mentally “stepped in” to that image and took on the posture, breathing and internal sensations. Then I imagined myself going through the show feeling those positive sensations.

The nervousness I had felt transformed into excitement. I was ready to go! Within a couple of minutes I was sitting down in front of the cameras ready to roll.

It’s a good thing I had decided to prepare myself because I was thrown several curve balls during the show. The most daunting task was them giving me 10 minutes to work with a woman who had a phobia of snakes so severe that she couldn’t even watch TV for fear that she would see a snake by accident. She couldn’t eat pasta because it was shaped like a snake!

As we headed backstage to do the work my mind was focused on the task at hand. I knew that more than 2 million people were waiting to see what I could do. I knew that 10 minutes wasn’t enough (even the NLP fast phobia cure takes about 15 minutes.) The American Psychiatric Association says you can expect “noticeable improvement in 10 to 20 weeks and a tremendous improvement within one year” in the treatment of phobias. I had 10 minutes.

Guess what? In 10 minutes I was able to get her to a point where she could stand 3 or 4 feet from a snake with no problem whatsoever. Phobia gone!

So, enough about me. How do you use this information to work for you? Here’s the step-by-step…

There you have it. You can use this technique to help you improve almost anything; from sports performance to anxiety issues. If you’re a hypnotherapist, you can use it with your clients, or better yet, teach your clients self-hypnosis and they can do it themselves.

That’s it for this Hypnosis Tip. Join me next time more more useful hypnosis information.

How Can We Change?