“If They Can’t Visualize, NLP Is Useless.”

“If They Can’t Visualize, NLP Is Useless.” 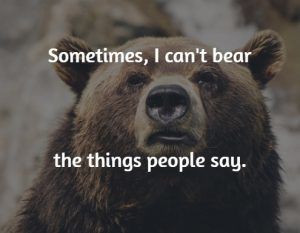 I could hardly believe it. I saw a comment in a discussion forum today. A professional in the field of hypnosis, said that, if a person can’t visualize, most of the NLP stuff is useless. That’s just plain wrong, and it gives me the opportunity to clear up some misconceptions about his misconceptions…

No One ‘Can’t Visualize’

More accurately, I’ve never run into anyone who can’t visualize. Now, I’ve run into plenty of folks that think they can’t visualize (many people aren’t very aware of their thoughts). I usually ask them where they’ve parked their car, or to describe their front door.

They’ll describe their car or door to me, in great detail. You’ll get color, location, size… They’ll make gestures as if they’re either pointing to where it is physically, or the image they have of it (usually out in front of them).

Let me ask you a question. Without looking at the clothes, what color were the clothes you wore two days ago? If you don’t remember, just think about something you might have worn. How do you think about that? By making pictures.

Now, there’s a slight possibility that you thought about it with sounds. You could have heard someone describe your clothes for you, and thinking about that. But think of it this way. We think with our senses. We hear things, and we think in sounds. We see things, and we think in imagery. We feel things and when we think about them again, we may feel some of the same feelings.

Using Your Senses For Thinking

There are certain things that are much easier to think about visually. Some are easier with sound. Most of us who learned the alphabet, did so with a little song. So, we may rely on audio thoughts primarily, when we recite the alphabet.

But sound, vision and feelings are always going on when we think. We tend not to think about our thoughts. But when we do, we tend to be more aware of one sense than the others. For instance, when you sing the alphabet song, you’re probably visualizing the alphabet too. It may be a bit less conscious, though.

Different senses are good for different things. A lot of people (me included), might not know if the letter “Q”, is before, or after the letter “V”, without going through the song. But if, in your mind, you had a neatly organized and arranged picture of the alphabet, you could see it instantly.

Great spellers are typically largely visual, with auditory enhancements, and a kinesthetic check. If they see a word misspelled, it doesn’t feel right. Good strategies usually have visual, sound, and feeling.

But sometimes, you get someone who is invested emotionally in not being able to visualize. It can be better just to use techniques, that don’t involve consciously making images, in that case. But they will be visualizing. They can’t not.