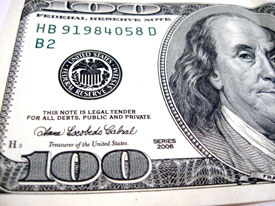 Benjamin Franklin’s formal schooling ended at age 10. Yet at age 16, he was contributing essays to a newspaper under the pen name Silence Doogood. He became a founding father of the U.S., a popular author, politician, scientist, musician, inventor, statesman, and diplomat. He invented the lightning rod, bifocals, the Franklin stove–all still in use today. He put together the first fire department in Pennsylvania and the first public lending library in America. Plus, the dude ended up on the hundred dollar bill!

…And he used hypnotic language. More about that in a bit…

“The more” hypnotic language pattern is a simple, highly effective way to get an idea into people’s minds–the basic idea of hypnotic suggestion.

To generate a “the more” pattern, think of something you want to motivate someone to do and something that they will do, or sense or that you can make happen.

Let’s suppose we want someone to go into trance and we know they’re going to hear your voice.

“The more you hear my voice, the more you go into trance.” You’re not limited to the word “more,” you can use “gain,” “increase” or any word or phrase that implies an increase.

Here It Is, As Applied To Learning NLP And Hypnosis…

“The more you discover about hypnosis and NLP, the more effective you become at it. Becoming more effective, you gain confidence and success.

The increased success and confidence drives more powerful learning states which help the learning and success gain even greater momentum.”

Wrapping The Mind Around An Idea

Those words, if you’re open to them, wrap your mind around the idea of learning more about NLP and hypnosis and getting better and better at using what you’ve learned. In effect, those are hypnotic suggestions (good ones for you).

Benjamin Franklin used this hypnotic pattern in one of his many famous quotes and I suspect, in his own thinking. “The more you practice, the luckier you’ll be.” I’d guess you understand how that quote wraps your mind around the idea that practicing helps you take advantage of opportunities when they arise (as they always do).

We ALL Use Hypnotic Language

Hypnotic language is a natural result of the mind being the way it is.  Because our minds are constructed to sometimes think in non-linear, metaphorical, symbolic ways, we respond to that type of communication and we all communicate that way!

Learning hypnotic language patterns is simply a way to do it more effectively,  more deliberately and in a more concentrated way.

Do you have any examples of famous people using hypnotic language patters?