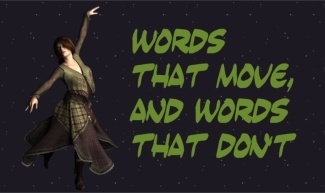 Remember fourth grade? That’s probably around the time a teacher first said to you “Verbs are action words. Nouns are things.” You’d already been using language for a lifetime, but since you acquired language naturally and unconsciously, you might never have thought about it in just that way before: there’s a class of words that describes things, and another that describes action. It was a useful lesson, and now that we’ve put fourth grade behind us, let’s learn something new.

Your teacher was right: verbs are action words. The actions they describe are processes—ongoing deeds that occur over time, have duration (and therefore a beginning and an end) and are subject to change. We read, we eat, we drink, we sleep, we wake, we walk and run and work and play, and all these are processes. We can start doing them, stop doing them, do them differently.

Nouns are things—also true. And things are not processes. A word that defines a thing does not describe or imply movement. We can probably all agree that your eyeball, cup, fork, nose and watch are all things, and as such their names remain the same regardless of their state of rest or motion. That said, it’s also true that you can eyeball something, cup it, fork it, nose it, or watch it, so nouns can, over time, become verbs, thereby acquiring means of motion—wheels, if you will.

There’s another trick we do with words that’s sometimes less useful, however—the trick of taking the wheels off a verb so that it sits there like a brick. And once we’ve done this, we often continue to believe that the verb has become a noun—that the process has become a thing—that something that moves has become frozen in time. And sometimes we trip over that brick when we least expect it.

If you’ve studied NLP you’ve probably learned a bit about how to recognize the difference between a natural noun—a noun that has always and ever described a thing—and a nominalization. Even if you haven’t, it’s fairly simple. For one thing, natural nouns make no sense when you put the word “ongoing” in front of them. You can have an “ongoing investigation,” but not an “ongoing toast rack.” And because nominalizations don’t describe real things, they can’t be put into a wheelbarrow. You could, for instance, put cats in a wheelbarrow (though I don’t recommend trying this at home), but not rage, craving, or even thoughts. These words describe ongoing processes that are subject to change over time, not things that occupy space.

Nominalizations have a way of limiting us in our thinking: once we’ve defined something we can sometimes find it difficult to re-define it. So when we think of something like “love” as a noun, we give it the attributes of a thing: we assume we can have it or be denied it, that someone else can give it to us, or we can give it to them; that it can be bought, sold, traded, bargained for, gambled with, withheld, stolen or destroyed in much the same way as a baseball. Loving, on the other hand, is something we do or do not do. It’s an action—a process with duration (and therefore a beginning and end) and is subject to change. I’m curious: how does thinking about it like that change the way you’ve been thinking about “love…?”

If you listen to a person (including yourself) describe something they perceive as a problem, one of the patterns you might hear is that of problems described as nouns, including nominalizations. People seldom perceive their problems as ongoing processes with duration, but are more likely to describe them as solid, real objects they possess:
“I have persistent unhappy thoughts.”
“I have a phobia.”
“I have a habit I’d like to break.”
Sometimes the thing you’re thinking of as a problem is something you don’t have, but wish you did:
“I want success.”
“I want a better relationship.”
“I need confidence.”

In both cases, you’re attempting to get rid of a thing, or get a thing, and in neither case does the thing exist per se. What does exist is an ongoing process through time. But when we see something in our life as beyond our power to change, there’s a good chance we’ve frozen an ongoing process into a nominalization, and having come to think of it as a thing, we’ve ceased to see the movement in it.

You can test this yourself by observing the images you make when you think of something you’re perceiving as a problem. If the image isn’t moving, de-nominalize your description and see if it changes. Rather than “having” persistent thoughts, notice what you’re thinking, and how you’re thinking it. Rather than wanting a “better relationship,” notice how you’re relating to others. Turn those phony nouns back into verbs.

When you describe a problem with a noun, consider whether you’ve taken a process that occurs through time, and frozen it into a thing that just sits there in the middle of your life like a bump in the road. Putting wheels on that bump may make it a lot easier to move. Changing the thing back into a process may make it easier for you to see the possibility of change. Nominalizations are metaphors*, and we respond to them metaphorically. You can give me your promise, for instance, but then you might break it. Since a promise isn’t a thing, it can’t be given or broken in reality, but we don’t operate in reality, and we certainly don’t make language there.

So next time you hear someone describe their problem as a thing, take a moment to discover whether you can put some wheels on it. Because as long as you realize you’re doing something, you can always do something else, can you not?

* …but then, all language is metaphorical, even and perhaps most importantly those parts we don’t recognize as being metaphorical. If that makes your head spin, you’re not alone.