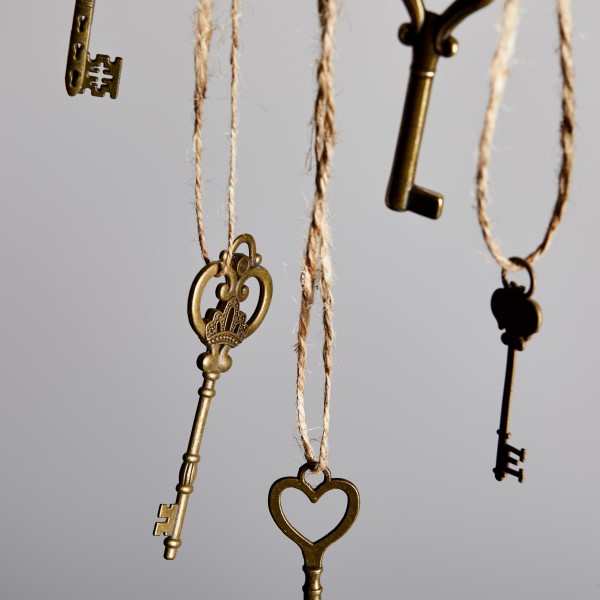 Or… How beliefs can create success or keep you struggling.

I rented a new place the other day. I got a mailbox key. Tried it. It didn’t work. It brought to mind beliefs.

A belief can be thought of as an idea about the way the universe operates. They can empower us or dis-empower us. Think of it this way. You have a can opener and you have an idea about how it works. Your success in using it likely depends on how accurate your idea is. Beliefs are the same way. Beliefs sometimes act on us the way deep hypnotic phenomenon do. Beliefs can cause us to see things that aren’t there or keep us from seeing things that are!

Watch this vid to see just how powerful even a small belief about what to pay attention to can change how you perceive.

“Hmmmmm,” I thought. “Why wouldn’t the mailbox key work?” It turns out I had a minor belief, more of an assumption really (like the one on the video), that was interfering with me finding the solution to that question. Take a look at the image below. The big orange arrow is my house. The small orange arrow points to the mailboxes right across the street. 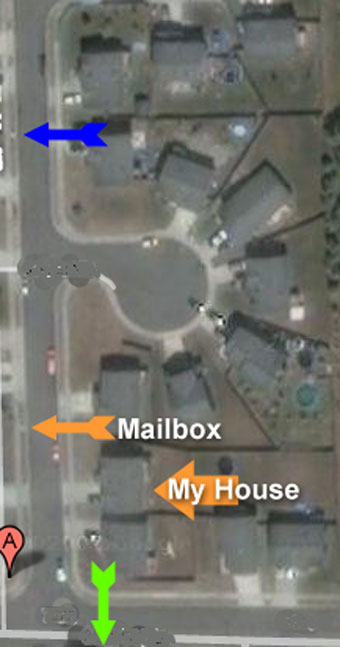 This mistaken belief caused me to block out possible solutions. We are all this way. Clients sometimes can’t find solutions to their problems because of beliefs. We help hem. There may be disempowering beliefs in the areas of our lives where we are not as successful as we would like

Got a belief that’s getting in the way? Is there a problem area in your life or in the life of a client that might indicate a disempowering belief? You can use this process to help remove that old belief and install a belief that helps get done what you want to get done!

There are enough “junky” beliefs out there so don’t go installing the belief that you can fly (without an airplane or other help) or that you are the greatest brain surgeon in the world (unless you are). I like to install beliefs that move from impossibilities to possibilities and also directional beliefs. “It’s possible for me to stop smoking easily” and “Each day I learn something new that helps me be a better hypnotist” are examples.

How To Uncover Disempowering Beliefs

You can uncover disempowering beliefs in several ways including…

1) Problem areas in someone’s life
If a person has consistent problems in a particular area, they may have a belief that’s getting in their way. If they have had lots of financial problems you might ask them what their beliefs about money are. If they’ve had relationship problems find out what they believe about relationships.

2) Capability language
Listen for a words that denote a lack of capability such as “can’t” and “impossible.” These words indicate a belief. “I can’t solve this math problem” might get you to ask “Why not?” You might get a “I’m just no good at math” response. That’s a belief!

3) Equation language: X causes Y or X means Y.
Beliefs are often expressed in equation form. Once you tune your ears to pick up these equations, it’s much easier to pick beliefs out of people’s language. Examples…

* “I can’t lose weight. Everyone in my family is overweight. It’s genetic.” (Genes cause me to be overweight.)
* “I failed the manual dexterity part of my GATB test in high school so I can never be a very good guitar player.” (Failing the test means I’m unable to be a good guitar player.)

1) Current Belief (the one you want to change)

1) Think about the belief you’d like to change and move onto position 1.

2) Step off of 1 and think about something which you are uncertain about; something you are open to doubting. Then step on position 2, taking time to fully experience that doubt. Imagine taking the belief you want to change into position 2 with you.

4) Take a moment to assess the process so far. Know that in the steps that follow you will have left your old belief behind.

5) As you continue, use position 4 to think about the new belief that replaces the undesired one.

6) At position 5 you recall something which you are open to believing even though you’re not really sure of it. When you get that feeling, bring your new belief into that space.

After going through the 6 positions once, repeat a second time.