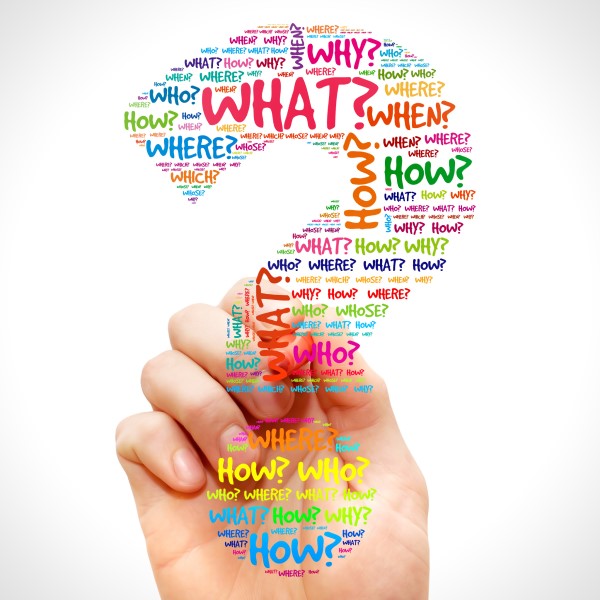 Pre-Induction Questions For Hypnotherapy – Or Just One Question

Pre-Induction Questions For Hypnotherapy – Or Just One Question

The setting – a downtown loft, VERY high end – beautiful hard wood floors, a wall of windows looking out over Puget Sound.  High, high ceilings and a perfectly modern and glowing stainless steel kitchen at one end.

Simple, almost understated furniture – the whole thing looked like a photo from Architectural Digest or one of those magazines that have the pictures of the houses that OTHER people live in, but I will never have.  I am very happy to never have that – I know myself well enough to know that I do not want that kind of responsibility!

My client, however – he fit his home.  He was kind of perfect, too! Well put together and precise in his presentation.  I was doing a rare house call, and I was, quite frankly, intimidated as hell.

I had parked my not too new car up the hill a ways, walked through the stinky alley a couple of blocks away, was feeling a little overheated and overwhelmed, and had just stepped into HIS world of perfection.  I was afraid to sit on his perfect chair.

What could I possibly offer this man, who so OBVIOUSLY had his life figured out?  He seemed to have it all!  So why was I there?  We shook hands, and began our work.  He was full of want and need and behaviors that he deemed “unworthy”.  He was working with me toward a goal, the specifics of which are not relevant.  After he told me his story, I asked him one question that, in his words, changed his way of thinking forever.  I know – it seems overly dramatic, that one simple question could open somebody’s mind like that, could change the way they think, maybe even change their life.  He says that is exactly what happened for him, and I have seen it in varying degrees reflect similar changes in many, many clients over the years.

“What’s Important About That?”

It is a question that informs the very foundation of how we frame the world in our thoughts – and an essential understanding to truly mastering NLP.

“What Is Important About That?”

That’s right…why does it matter?  What does it do for you?  By having that, what does it lead to that is even MORE important?

More clarity may be needed…so let me explain.  Helping people realize that they are the thinkers of their thoughts, and that the thoughts that they think often source from unconscious needs and desires, which ultimately drive many behaviors.  That is the point – often, that simple realization can be their “aha” moment – when they realize that the very valid and self-nurturing, self-loving intent of a behavior, may be the driving force behind some of their most unwanted and under appreciated actions – actions over which they often feel powerless.

A Moment of Pause

We can talk about separating behavior from intent.  We can explain that our parts (or unconscious programs) get set sometimes very early in life, and these have been driving behavior for much of our lives.  We can talk a lot…or we can ask them “What’s important about that?”, and watch them STOP for a moment.  Watch them have one of those lovely, silent, blank moments that are SO useful, often followed by a “Huh?”.

“What’s important about that?  Imagine having that thing that you want (money, the fancy house, exercising every day, etc, etc, etc), in JUST the way you want it.  Experience in your imagination having it completely, FEEL what that feels like.  What does that do for you?  What does that allow for in your life?  By having that, what do you get that is even MORE important?”

What happened in my perfect client’s perfect brain?  It stopped, for just an instant.  This was a man driven – and he was well into his 40’s and highly successful by society’s standards.  Prior to that one, simple question, he had no idea why he did the things he did.  He thought he wanted the money and the power and the REALLY cool loft (it was…honestly – REALLY cool).  He found out, as is so often the case, that he was actually after a particular feeling.  That his behaviors, especially those he hated, those he wanted desperately to get RID of…those behaviors were after something really GOOD.

Sometimes that one, simple question takes a little bit of explaining – but it is SO worth it.  When they finally realize what they are REALLY after…and that sometimes the very  behaviors that we least appreciate in ourselves are the result of some part of us truly believing that THAT behavior is going to deliver something essential.

So when I find myself really wanting something I do not think I have, or really struggling between two seemingly opposing internal forces…I simply ask myself, “Self – what’s important about that?”.

PS – You can learn more about NLP through many of Keith’s stellar programs.  Two programs that include ideas reflected in this article are Parts Therapy and Setting Goals.

Maggie discovered NLP while still in college, and went on to learn hypnosis and NLP over 25 years ago. She is a Certified Hypnotherapist, NLP Master Practitioner, Hypnosis & NLP trainer, writer and artist. She is always learning and expanding her "map".