How To Get The Crazies Out Of Your Head
4

How To Get The Crazies Out Of Your Head

The Story Of A Broken Heart & A Lost Head 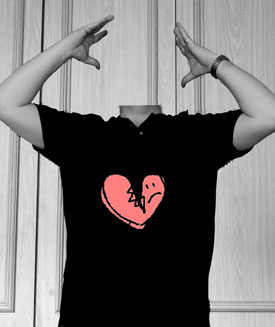 Recently, something came up that reminded me of a situation from several years ago and probably the least sexy tool in the NLP tool bag–the Meta Model. The Meta Model is also one of the most powerful tools in NLP.

It’s what the meta model can do that’s exciting…

Basically, it can help you drive deeper into any communication and strip away fluff. It’s excellent for de-hypnotizing people from their crappy trances and getting rid of those crappy meanings.

People’s problems regularly have to do with the connection and meanings they give to events in their lives. The same is true of my life too, of course. Where we have problem areas in our lives, we’re likely to have meanings about that context that aren’t working for us in at least one way.

To some, food = love. That meaning might not work out too well for someone trying to slim down. But this isn’t a story about food. It’s a story about love… More accurately, it’s about someone with a broken heart. He and his girlfriend had broken up and now she was going out with someone else.

“She’s betrayed me,” he said. That’s where the non-sexy tool came in. He had created a meaning in his mind. The fact that his ex was now seeing another man meant to him that she had betrayed him. What NLP tool is great for de-constructing these meanings? Well, Sleight of Mouth for one. But we’re going to talk about another today–the Meta Model.

One of the things the Meta Model can do is strip away the language that hides these less-than-useful meanings. Many beliefs are set up in a meaning equation. The fact that “X” happened means that “Y” is true.  “X” means “Y” or “X” caused “Y”. She’s going out with a new guy so that means she betrayed me.

The Meta Model would help him examine and de-construct that belief.  A word of warning… If you don’t do it with rapport you’re likely to have an extremely pissed off person on your hands.  Folks generally don’t like their beliefs examined too closely. Confronted either.

How Does This Mean That?

You can continue this process for a while and uncover the related beliefs that are causing distress.

What you’ll likely uncover is what I call a belief stack. It’s a set of related beliefs that may lead back to more central issue. In this case, you might eventually get to the belief (as I did with this person) that they didn’t feel they were worthy of love. Now, just take a minute to consider something… In about 5 minutes of questioning, you’ve gotten to a central issue. It’s an issue that may have been bothering this person for most of his or her life. How’s that for brief therapy?

But It’s No Cure

But the Meta Model is no cure. Sometimes it can be used as an intervention by itself but most times, you’ll have to use some other technique once you find out what the central issue is. When it is helpful in and of itself is when sufficiently detailed examination of the beliefs leads to a shift in them. At some point in the Meta Model process, you’ll likely ask, “How specifically, do you know that’s true?” In other words, how does he know she never loved him or that she betrayed him? What process does he go through that results in the feeling of “knowing”?

Well likely, he’s running a movie in his head or making a mental image that gives him that feeling. Hey, I’ve been there. He may be reviewing their past experiences together that he believed were loving and changing the memory in some way. Perhaps the images are now translucent to indicate to him that they never were real. Perhaps he sees her with a non-loving look on her face and comments to himself, “See, that was a lie.” Perhaps he’s doing something else entirely such as thinking about what his ex and her new boyfriend might be doing right at that moment. But what you can be sure of is that he is doing something in his head that results in that bad feeling in himself.

If the person is self-aware enough or if you can gently lead them to the realization, they’ll realize something along these lines…

“The things I’m doing in my head are making me feel bad. If I want to feel better, I need to change what’s going in inside my mind.” Sometimes, that’s enough to create a useful shift. More often than not though, you’ll need to take what you find into another technique. You might follow the feeling back to the first time it happened with an affect bridge. You might do something similar to the NLP fast phobia cure or a swish pattern to take the sting out of a mental movie, image or sound.

But for me personally, there’s been tremendous benefit to simply realizing that the meanings I make up in my head about stuff can motivate me or suck the motivation out of me. They can help me get things done or stop me from doing them. They can depress me or elate me.

And knowing that helps me take the times I don’t feel as well as I’d like and the thoughts I’d rather not have less seriously. And that, plus knowing how to deal with those crappy beliefs once you find them is how to diminish the power of non-resourceful thinking. In other words, how to get the crazies out of your head. The last time I went through a painful breakup, I meta-modeled the crap out of my less-than-helpful thinking. It still wasn’t easy, but it made it a lot better. 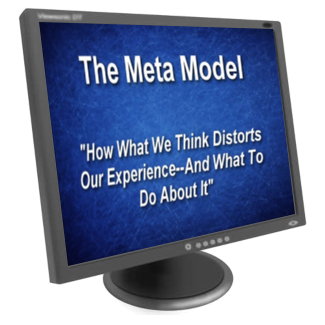 Discover More About The Meta Model Now And boost your power with langauge!
Support Hypnosis & NLP

The Value Of The Right Questions