Persuade With Pleasure or Pain?

Persuade With Pleasure or Pain? 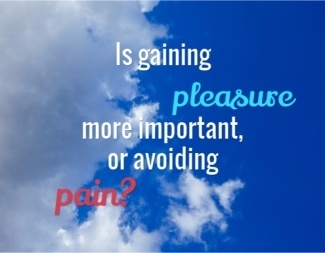 Meta Programs describe ways people sort and filter information. Knowing how someone sorts and filters information is crucial, if you want to persuade them. Think of it this way; structure your communication to match how a person thinks, and it will be like a key fitting a lock.

Today, I’m going to talk about one particularly powerful meta program and how to use it in persuasion. And by the way, a lot of therapy is persuasion.

We’re going to talk about the ‘Towards or Away’ meta program. ‘Towards or Away’ describes how much a person is motivated by potential gains compared to negative consequences. Folks are motivated by pleasure, or pain — the carrot or the stick. When a person is thinking about doing their taxes, the relief of having them done can be more powerful — or the thought of getting penalized if taxes don’t get done.

Well, most people are a mixture of towards and away motivation, but may lean more one way in a specific context. You can ask them a question about that context, to see. Something like, “What do you think about when you’re deciding whether or not to buy a car?” can do it.

The Most Common Mistake

Now, it’s generally a good idea to have goals stated in the positive. You want people to phrase what they want, and not what they don’t want. In other words, if you were to form a goal, you’d want to say that you’d like to be ‘neat and tidy’, rather than saying, “I don’t want to be a slob”. ‘Neat and tidy’ is what you want, ‘not being a slob’ says what you don’t want.

‘Towards or Away’ is a bit different. It’s how you motivate the person about their goal.

So, away motivation language might include phrases or words such as “avoid”, “steer clear of”, “sidestep”, “evade”, “skirt”, “elude” and so on. ‘Toward motivation’ language could include “get”, “obtain”, “attain”, “achieve”, etc.

So, with a largely ‘away from’ person, who wants to be neat and tidy, you’d structure your language so they would ‘be neat and tidy to avoid the pitfalls of messiness and steer clear of the drawbacks of sloppiness.’ See? The goal is stated in the positive, the motivational language is about what they can avoid  by achieving their goal.

Persuade Those Away Motivate People…

Imagine that you wish to motivate someone to exercise more (it could be you, a client, or a friend), and they’re ‘away’ motivated. If you don’t package your communication to them, in the way they need it, it will fall flat. If you want to motivate them, and avoid wasting your time, phrase your motivational speech in ‘away from’ language!