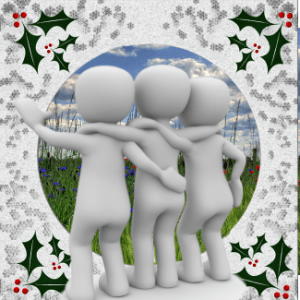 I was talking to a friend of mine, and she was down on herself. “I’m a bad person.”, she said. She went on to explain to me that she had been thinking thoughts that ran counter to her belief system.

“Thinking something and doing something are separate things.”, I said. I told her stories about the guy who lives across the street from me and yells obscenities at the top of his lungs at all hours. “Sometimes, I think about killing him,”  I told her. “But I almost never do. It’s just a thought.”

Then I told her about spending time with my father when he was dying. Sometimes it was tough. He would try to get up in the middle of the night, not knowing where he was, and start pulling out all the medical devices attached to him, heading off who knows where. If it was my shift to sit with him, I’d get him settled back in. Ten minutes later, he was at it again.

One particularly trying night at about  2 AM, when I was half asleep, it happened, and then happened again, almost as soon as I got him back in bed. Irritated, frustrated, and tired, I had the thought — “I wish he would just die.”

Now, here’s the thing. I didn’t really wish that. I was just frustrated and tired. And it was just a thought. So, I didn’t give it any power. “You can have any thought you want,” I told myself, “It doesn’t change who you are and how you feel at the deepest levels.”

What Can You Do When You Have ‘Bad’ Thoughts?

So, when I have a thought I don’t care for — one that I don’t see as in line with my principles, there’s a brief process I go through.

The thing I don’t do is beat myself up. I treat it just about how I would treat a thought of robbing a bank. Sure, it would be nice to have piles of money, but I’m never going to take that idea seriously. And frankly, the world would be a lot better place if people just acknowledged their thoughts, but didn’t feel the need to necessarily take them seriously. Just have a thought, and let it go, man!

Here’s the process that was going on, when I was chatting with my friend. She was in the process of building an identity level belief about herself, that she was a bad person. Well, we act out our beliefs. What do you do if you’re a bad person? You do all sorts of bad things, of course!

But what if you felt you were a good person, who made mistakes? That belief would likely generate far less “bad” behavior. Here’s a different question — What belief would generate the least amount of damage, and even potentially result in some personal progress?

My conclusion was the belief that thoughts are just thoughts, they don’t mean much about who you are, was a better choice. But thoughts often contain clues about issues that would be good to address. That might be good to add to the belief. The thoughts caused my friend conflict. It might be helpful to resolve that conflict.

Now, keep in mind, various therapies have made up all kinds of stories and helped build all kinds of beliefs in clients. The old cliche’ about Freud was that everything came down to some sort of sexual conflict about your mother. That seems like a belief I’d like to avoid building in people.

A lot of psychology seems to have a “No pain, no gain” element, or an “If you have a problem, it must be rooted in trauma” element. Those don’t seem particularly useful. Even parts therapy from NLP has its drawbacks, if you view everything through that lens. And there are lots of theories that range from alien abduction, to entity possession that are just downright harmful to clients, for the most part. So, if you have a theoretical framework that emphasizes these harmful elements, I wish you’d just get out of the business.

Anyway, I wanted to help my friend avoid labeling herself a bad person for having what she termed “bad” thoughts. So, I told her the stories I just told you, and brought up some examples of thoughts we all have that don’t really mean anything much.

A while back, I was mentoring a practitioner who didn’t trust her skills. In my estimation, she was pretty darn good. Really good, in fact. But that didn’t mean perfect. She lacked a little piece of strategy or two. But mostly, she needed some help overcoming the feelings that would come up when things weren’t going her way. When you feel a lot of negative feelings, you typically don’t perform as well as you could.

Having done a few sessions, I know that it rarely goes 100% your way. But it’s kind of like a football game. You can be behind the whole game, look pretty bad, and still win. It’s the score at the end that counts. And the same is true of sessions.

You can try 50 techniques, and 49 of them can fail. But if you get the results with the last one, you’ve been successful with that client. You can be 100% successful, with a 2% success rate! But if each technique that you try that doesn’t work makes you think you’re a failure, or not a good practitioner, you’re in for a rough ride, and an unpleasant career.

So, if I were to chart out the belief that was being built, it would go something like, “This technique didn’t work, or I failed with the client, and that means I’m just not good at this.”

Now, there are lots of ways to help change that belief. Lots of them are similar to what’s called the redefine sleight of mouth pattern. In this pattern, you take a look at the belief equation. The belief can often be stated in the form of X means Y. In this case, X is “That technique didn’t work” and Y is “I’m not good at this.”

With the redefine pattern, we change it to, X does not mean Y. It means Z, and that’s Q. Z and Q are new factors that we introduce. Stay with me here . . .

Now, inherent in this technique, is a big ‘but’ (Anyone else thinking of Pee-wee’s Big Adventure right now?). ‘But’ is a dividing, negating word. That belief equation is “X means Y”, and we divide that up and say “X does not mean Y”. That’s how it starts.

Now, if you go back to the story about my friend, and her thoughts, you’ll see the same dividing process. “Bad thoughts mean I’m a bad person.” “No, thoughts are just thoughts.” Split that sucker apart!

So, that’s what I want you folks to think about right now. Let me give you an example, and you can have at it.

Sometimes, when I teach, I’ll hear students say that I can do NLP or hypnosis effectively because I have a lot of talent, or experience, but they can’t, because they don’t have those things. In the comments below, let me know what beliefs they’re building, and how you would split those beliefs apart!

How To Never Give Up: Part III (Limiting Beliefs)