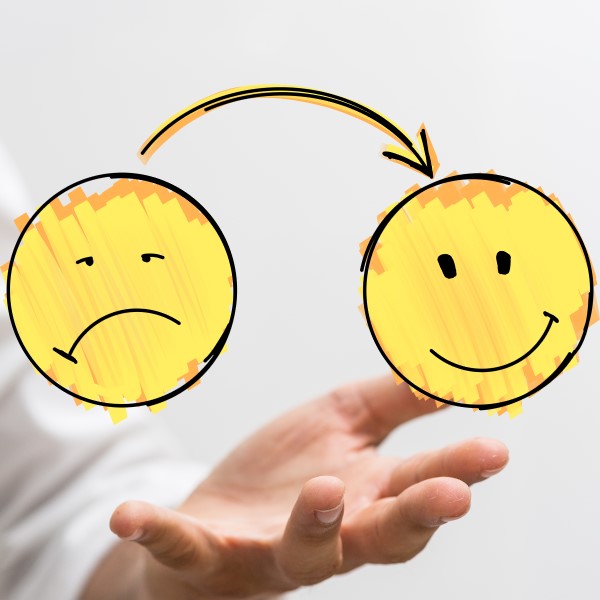 The other day I called a friend I hadn’t seen for a while. He was feeling down, so I insulted him. That’s right, I insulted him — and it helped him come out of his funk. How did it work? Negative reframing.

Negative reframing is a subject I’ve never heard talked about before but it’s a technique I use regularly for two reasons. But first, let’s define some terms.

Reframing: Reframing is the art of changing meaning. Where a person has a problem, they likely have beliefs/meanings about the problem that aren’t working for them. For instance, a smoker might have equated smoking with freedom (smoking = freedom is their meaning). Someone with an anger problem might think they’re being attacked when their co-worker uses a certain tone of voice (tone of voice = attack, to them). When you can help that person (or yourself), change those meanings, you make it much easier to change the behavior they want to change. That’s why reframing is a key component of helping people change with NLP.

The two reasons I use negative reframing are this…

1) It’s fun. Negative reframing is fun and a great way to practice reframing. Have you ever watched a roast? It’s an event in which a “guest of honor” is insulted and praised – it’s like a sarcastic toast. If done well, they can be hilarious. Done poorly they can be harsh and mean. Roasts usually have a lot of comedic insults in them. Well, comedy is reframing. And if you want to practice reframing and have it be fun, insults and exaggerating negatives are ways to do it.

2) For some personality types, negative reframing can hit the spot. For instance, if a person likes to give counter-examples to everything you say about them, saying something negative about them may trigger their pattern of finding a counter-example. Their counter example may force them to consider positive aspects of themselves.

A Word Of Caution

Of course, negative reframing must be used with rapport and with caution. You don’t want to make a depressed person feel worse, for example. So, only use negative reframing when your pretty darn sure it’s going to have the effect you want it to. And many times reframing is just the foot in the door. Once you get a person to reconsider their belief, you might need to give them something more positive to replace it.

So, when I called my buddy and found out he was feeling low, I figured coming out to dinner with me and getting out of his apartment would raise his spirits. So, I said, “Let’s go have dinner.” “No,” he said. “I don’t think I’d be very good company.” What was the “negative” reframe I delivered that changed his mind? “What makes you think you were ever good company?”

“What makes you think you were ever good company?”

That comment had an interesting effect on him. First, he laughed. Then he commented that it was probably true — he had never been very good company. Then he said he’d join me. We had a good time — watched an old video of a live performance of our “Quadstock” gig with a band we were both in years ago.

Why did that comment work to motivate him? Well, he was thinking about his mental state in a certain way. Namely, he was thinking that since he wasn’t feeling like being very good company that it would bring me down. That logic was predicated on this being an unusual situation. In other words, since he was not good company at that moment, I wouldn’t have fun. I changed the frame by hinting that he was never good company and I’d hung out with him many times in spite of that. In other words, his negative mood was not an unusual event that would get to me; it was par for the course and I’d dealt with it before. Therefor, his reason for not coming was invalid.

I would bet you that if I had said, “That’s OK, I don’t mind if you’re not feeling well,” he would have decided not to join me. It was the negative reframe that caught him off-guard and made him question his premise.

So, how do you reframe and negative reframe?

One Way To Reframe

One way to reframe is to think about what meaning someone probably has attached to a situation and then ask yourself, “What other meaning could apply here?” Then, if you think the new meaning will have a net positive effect, deliver that new meaning verbally.

Example: “Smoking feels like freedom to me. I can smoke if I want to. Nobody can tell me what I can and can not do.” In this person’s mind, smoking equals freedom. Not smoking means that he or she is being told what to do. Perhaps there’s a feeling of rebellion attached to that (we’d have to explore further to know for sure). What other possible meanings are there to smoking?

Smoking is not freedom, of course. Having to smoke is the opposite — it’s being trapped. That’s one possible meaning. Plus, doing what the large, multi-national corporate cigarette manufacturers want you to do is not really an effective rebellion. It could be thought of a caving in. So, smoking is being trapped and caving in. That’s quite different than freedom and rebellion.

So, your “negative” reframe could be…

“Wow. Freedom, huh? Well, good for you. Personally, I’d hate to be trapped — having to smoke all the time. I wouldn’t want to have to limit myself in that way. And putting money onto the hands of those corporate bigwigs just makes me feel like I’m doing their bidding. I’d rather have the freedom of making my own decisions. And if there’s something to fight back against, addiction and corporate greed would be it, rather than caving in to their wishes.”

Now, you have to do that with rapport or you’re just going to get into an argument and entrench them in their position. And that reframe probably wouldn’t be effective if it didn’t align with their other belief systems (if they were a corporate lobbyist, for instance).

With negative reframing, you use the reframe to emphasize some negative aspect of the person or the situation. You could exaggerate to the point where it becomes ridiculous, for example. “Dude, you wouldn’t just bring me down. You’d probably drive everyone in the restaurant to quit. Little children will cry. Rocky will give up. Balloons will deflate. Journey will stop believin’.”

Sometimes exaggerating something will show the person how out of proportion their thinking is.

I exaggerated by lengthening the time frame. Instead of him bringing me down because he was not feeling well at that moment, the time frame was expanded to include all of our history. And that had the strange effect of making him realize that his being in a bad mood didn’t necessarily mean I would get brought down too. In other words, his belief was shifted.

Some People Have Trouble With This One

I know. We’re supposed to be positive all the time. We can’t insult clients or emphasize negatives to them, we want to help. Well, what if negative reframing is exactly what they need in that moment? Then, being positive at all costs is really not the best way to proceed, is it?