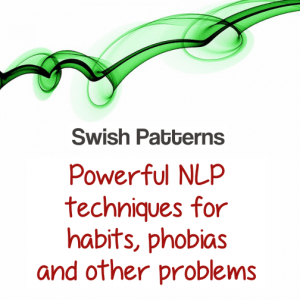 We all have automatic thought processes. For instance, if I were to sing, “Mary had a…,” if you’d learned that song in childhood–you’d finish the phrase in your mind…

That’s an example of a thought process we’ve rehearsed in a specific way, that has a specific outcome. It’s very difficult to consciously stop that process. It’s automatic

We all have many behavior patterns like this in our lives. “Mary had a little lamb” is an auditory example. There are visual patterns and combo visual/auditory/kinesthetic patterns as well.

Let’s take, for example, a person who answers the phone and then “finds” a cigarette in their hands. If you were to explore that further, you might find that when they answer the phone, they get an image of a nice glowing cigarette ember with a little bit of smoke curling up and looking at the picture, say to themselves, “Mmmm, a cigarette sounds good right now.” It’s rehearsed in–they’ve done it a thousand times.

That might be the person’s strategy (series of thoughts) for creating the desire for a cigarette. If we were to change one of those elements in the strategy, it would create a different feeling and motivate that person in a different way.

Phobias are Thought Patterns too!

Someone who has a fear of spiders may see one and “boom”, they get a picture of a spider in their mind. That picture of a spider is connected to a feeling of panic. If we were to take that picture and change it out, and rehearse it a few times, the new picture would have a different feeling attached to it. That person would feel differently when they saw a spider.

How we Generate Negative Feelings

Somebody that has low self-esteem might see someone they’re interested in meeting. They might immediately start to generate self-talk that goes something like “Oh, you don’t want to go talk to them. Remember all the terrible things that happened to you in the past when you talked to people.” They might make picture of all the things that could go wrong or have gone wrong in the past. That leads to a feeling of shyness or low self-esteem in that particular context.

If we were to intervene at any of those places and switch out those thoughts very quickly, and rehearse it a few times; what would happen is that that person would have a different feeling and it would motivate them in a different way.

How a Swish Pattern Works

Essentially, a swish pattern works by changing out one thought in a particular strategy (sequence of thoughts), in order to get that person to feel a different way.

It’s very powerful and it works because the mind works quickly. We do it very quickly. It’s not about getting and combating ourselves or thinking positively. We need to take the specific thought that they have, and change it very quickly in a direction that leads them to a new feeling and motivates them.

Example: If the person who has the spider image wanted to do a swish pattern…

The auditory swish works in a similar way. You get the trigger sound, and a resource sound. You start with the trigger, and switch midway through, to the resource. You do it more and more quickly, until the old one automatically goes to the new.

No related Related NLP & Hypnosis posts for this content