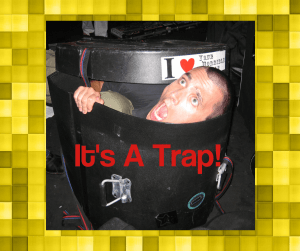 or… Everybody Wants a Procedure…

Where a Metaphor is Inaccurate, We May Fall Short

Knowing what tools to use in what order is similar to a recipe. Sometimes NLP processes are described as recipes. But remember–a metaphor (or simile) is not the thing it describes. Where the metaphor falls down is where we have to let it go and think of some more accurate way to communicate an idea.

Here’s the thing about recipes. It’s generally you, some tools and the ingredients. “Chop up the carrots. Dice the potatoes. Add flour. Stir.”

People Are Not Carrots

Scripts And Procedures Can Be a Trap

Can you imagine scripting a conversation about what to say when you meet someone you want to ask out on a date? OK. You say “Hello,” then she says “Hello.” You say, “It’s pretty nasty weather outside” and she says “At least it’s not as windy as it was yesterday.” Well, what happens when she doesn’t react the way she’s supposed to in the script? You get stuck, that’s what. And you can’t really effectively script an NLP or hypnosis session any more effectively than you can script a conversation.

So I could say, “For smoking cessation, first gather information, then do parts work, then direct suggestion–but it would be a trap. You might feel like you knew what you were doing going in to the session but once the session got “off script” you might feel lost.

But you could give a set of process based instructions for a conversation, couldn’t you?

1) First, introduce yourself.
2) Make small talk (weather etc.)
3) If the small talk seems to be going well, move to more personal subject “What do you do for a living?” ‘What do you do for fun?” etc.
4) As you find interests in common, think of an activity you could do together and suggest it for a specific time “I love macrame’ too. Let’s go to the macrame’ convention on Thursday.”

We can do the same thing for smoking cessation or any other sort of NLP or hypnosis session. It would be more of a guideline really.

A Big Picture Process for an Intervention

Step 1 will give you direction as to what to do in step 2. If the treatment goal is to stop smoking, while you’re well forming the goal, they might tell you that “One part of me wants to stop but another part of me really likes it.” That might mean parts work is called for. If you see signs of age regression when they talk about their problem then a regression based technique could be a good approach (time lines, affect bridge etc.). When you run into beliefs that are getting in the way of desired change–reframe with sleight of mouth patterns or do re-imprinting to change a limiting decision. If they experience a negative emotion an anchor collapse might help.

At each phase you test your work. If any of the problem remains, take it back up into step 2.

Remember, NLP is process based–not context based. Put in another way, you could help someone stop smoking without even knowing that’s what they wanted to do!

Client: “Hey, I want to stop doing something.”
Practitioner: “How do you know when it’s time to do the thing you want to stop?”
Client: “I make a picture of myself doing it, say to myself ‘That’s cool,’ and then get a great feeling about doing it.”
Practitioner: “Whatever it is you’d like to do instead–Make of picture, inside your mind, of yourself doing it. We’re going to do something called a swish pattern…”